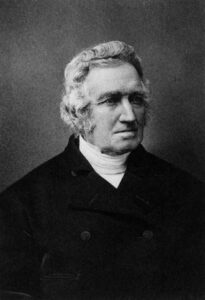 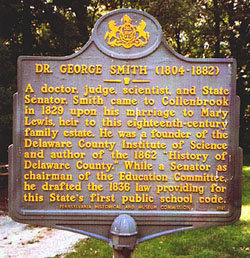 On February 12, 1804, in a house along Manoa Road where it crosses Naylors Run, Margaret Dunn smith delivered a son, George to her growing family that consisted of her husband, Benjamin Hayes Smith, and their daughter, Elizabeth.George was destined to become an esteemed public servant. One of his ancestors, Richard Hayes, of Imiston, Pembrokeshire, Wales, immigrated to the New World in 1687 to seek freedom from persecution as a member of the Society of Friends. He purchased land along the Darby-Paoli Road in Haverford Township, through which Naylors Run flowed. He constructed the house in which his descendent, George Smith, would be born. He lived there until his death in 1697.

Richard’s son, Richard Hayes, II, was the first in the family to seek public office in the new colony of Pennsylvania. He served in the Assembly of Pennsylvania five times for a total of 12 years between 1704 and 1737. He, also, served as Judge of the Courts of what then was then known as Chester County and as a commissioner of the Loan Office.

Richard II’s daughter, Elizabeth, married George Smith, who would be the grandfather of Dr. George Smith. Elizabeth’s husband, George, was the son of Thomas Smith, who was born in Ilkey, England. Like many other oppressed people, Thomas came to the City of Philadelphia in the colony of Pennsylvania to start a new life. Elizabeth and George raised their son, Benjamin Hayes Smith, to be a leader and public servant. Benjamin was a life-long member of the Society of Friends, Haverford Meeting, and he was in charge of the First Day School for many years. Shortly after his marriage to Margaret Dunn, the daughter of George and Mary Curry Dunn, Benjamin was elected to the Pennsylvania state legislature where he served from 1801 to 1804. With the birth of his second child, George, on February 12, 1804, Benjamin took an appointment from Governor McKean as a Justice of the Peace, Benjamin died in 1806 only two years after his son, George’s, birth. He reportedly suffered a wound at the hands of a vicious student in his father’s school, where he served as an assistant teacher. The injury eventually led to his death.

Young George Smith began his education in the neighborhood schools. Later, he was sent to the Academy of Jonathan Gause, a boarding school of West Chester. Always a well read and curious boy, particularly in the area of science, George enrolled in the Medical Department of the University of Pennsylvania. On April 7, 1826, at the age of 22, George received his degree of Doctor of Medicine from Penn.

George immediately began practicing medicine in the Boro of Darby. Located a short distance up Darby Creek from the Delaware River and at the junction of the Darby-Paoli Road and the King’s Highway, Darby was one of the liveliest and most prosperous towns in Delware County. Soon after he began his medical career, he started to take courting a young lady whom he had known for many years through his affiliation with the Haverford Friends Meeting, Mary Lewis. Mary had her own long lineage in the former colony of Pennsylvania. Her great-great grandfather, Ralph Lewis, a Welsh colonizer and sawmill owner, had purchased about 150 acres of land in 1692 along Darby Creek on the western edge of what would later become Upper Darby Township. Mary’s was born in 1808, to Abraham Lewis, III and his wife Rebecca Lawrence Lewis at the Lewis’s ancestral home Collen Brook Farm. The Lewis farm was one of the largest and most prominent in Delaware County.

In 1831, just two years after marrying Mary and inheriting her family’s farm, George was elected to the Pennsylvania State Senate representing both Delaware and Chester Counties. When his term began in 1832, George was appointed to the committee that would first make him a well-known figure in Pennsylvania politics-the Education Committee. As a committee member, George dealt with the problem of the Pauper Act of 1809. The Pauper Act provided a free education to the poorest members of Pennsylvania society. Because of the stigma attached to attending the pauper schools, the Pauper Act was not very successful. The Education Committee then came up with the Act of April 1, 1834 law, which guaranteed all children in those districts in Pennsylvania that did not opt out, a free education paid for by tax dollars. While the law passed easily in the legislature, powerful opponents, including the wealthy land owners, who paid most of the real estate taxes that would fund the public schools, and religious schools that felt threatened by the competition, insured that most school districts across the Commonwealth opted out of the new system. When George rose to the position of chair of the committee later in 1834, he was able to craft the Act of 1836, which amended the Act of April 1, 1834. The new act overcame most of the opposition to the 1834 act, thus paving the way for universal public education in the state. Recognizing his role in saving the concept of public education, Delaware County appointed George as the first superintendent of the Common Schools, and Upper Darby appointed him president of its School Board, a position he held for 25 years.

Following the bruising battle for public education, George resigned his office as state senator on December 8, 1836. Governor Joseph Ritner, grateful for George’s efforts and impressed by his wisdom and knowledge, appointed George as an Associate Judge of the court of Common Pleas of Delaware County. George traveled quarterly to the City of Chester, the then county seat, to preside at cases for six years until 1842. When the county seat was moved to Media in 1849, George agreed to serve again on the court, and he did so from 1861 to 1866 during the Civil War years. It was around this time that George bought a house at 410 West State Street in what became known as Brook Row, which had been built in 1855.

During his early years as a state senator, George found time when the Senate was not in session to pursue his life long passion, science. On September 21, 1833, George, along with John Cassin, George Miller, John Miller and Minshall Painter, founded in the home of Isaac Hall of Nether Providence the organization that would define his life – the Delaware County Institute of Science. In May 1834, George was elected the institute’s first president. The association incorporated on February 8, 1836. In 1837, the institute built its first permanent home on Rose Tree Road just off Providence Road. The members met regularly, collecting and displaying specimens of natural history of the county. George donated to the institute his herbarium collection, which was one of the most extensive collections of dried native plants ever assembled. Other members produced research and specimens in the field of botany, mineralogy and geology. Rumored to be a station on the Underground Railroad, the men were never caught harboring fugitive slaves, although there is indeed a mysterious subterranean room underneath the basement of the building whose small entrance was hidden by a large chest of drawers. In February 1868, George and his fellow members moved the institute to a larger and more functional building that they designed and built on Veterans Square, down the street from the county court house. George served as president of the institute until his death.

One of George’s most impressive talents was his writing ability. This also helped to establish his lasting legacy. Many of his most famous and influential writings were commissioned by the Delaware County Institute of Science. In 1835, when the federal government rejected stone from Leiper’s Quarry on Crum Creek as the material for building the breakwater at the mouth of the Delaware Bay, George wrote An Essay Demonstrating the Fitness of the Stone Quarried at Leiper’s Quarry, in Delaware County, for Use in Erecting the Delaware Breakwater. George proved that not only was Leiper’s stone adequate, but it was actually superior to stone that was quarried elsewhere. As a direct result of George’s essay, the federal engineers restored Leiper as the principle stone supplier for the breakwater. In 1843, George wrote An Account of the Great Rainstorm and Flood of August 5, 1843. This remarkable report documented the disastrous storm that caused unprecedented flooding along Darby, Crum, Ridley and Chester creeks. The commission for which George is most remembered, however, was the monumental task of writing the history of Delaware County. Although started by Joseph Edwards, Esq., shortly before his death, George picked up the project, entirely re-writing Edward’s early history. The History of Delaware County, published in 1862, is a 581 page record of the county from its discovery to the contemporary time. The history includes 76 pages of biographical notices. George arranged the biographical section in dictionary form, a format then unique to such books. Not only was George’s history hailed as a great manuscript, it also became the model for county histories around the Commonwealth and the nation.

George’s final days were related by his great-great grandson, Lewis Cheyney Smith Jr., at an address to the Delaware County Institute of Science on October 14, 1985.

Dr. Smith was active right up to the end of his life pursuing the various cultural, historical and scientific subjects that he enjoyed and on which he was so knowledgeable. On the 12th of February, 1882, he was seventy-eight years old, and on that day he wrote several letters to friends, each of them marked by the vigor of thought and gentle courtesy which was so characteristic of him. Twelve days later he arose early in the morning, as was his custom; but feeling faint returned to his bed, and in a few minutes, apparently without pain, passed into a state of unconsciousness, which soon deepened into that of death.

Dr. George Smith’s life was an exalted example of service to society, life-long learning, and responsibility to generations yet to come.